The Bancor Protocol: the Tip of the Iceberg

Equilibrium recently announced the launch of its new R&D division, Equilibrium Labs, aiming to develop new price-pegging algorithms and structures that will bring enhanced liquidity to the decentralized finance market.

The Bancor protocol is a simple and elegant solution that lets tokens be converted to other types of tokens. The price of conversion is solely determined by the ratio of the transparent reserves of each token. It’s an ambitious initiative named after Keynes famous proposal to create a “currency union” that would “generalize the essential principle of banking as it is exhibited within any closed system. This system is the necessary equality of credits and debits, of assets and liabilities.”

Extensive research has already formalized and simulated Keynes’s model. Looking at Valdecantos and Zezza’s work, we can immediately weigh the potential complexity of modelling a real-world economy with four “countries:” the United States, Europe, China, and the rest of the world.

In the real-world economy, a country’s inhabitants work, produce, export, import, and consume. Agents have risks and preferences. Naturally, prices will reflect these risks and preferences. By contrast, the price of a Bancor Relay is completely determined by the amount of available tokens held in reserve (eg. the Bancor “connectors”). The concept of risk is missing, and with good reason.

From a stablecoin perspective, Bancor can be used to synthesize the most trivial model of a central bank with a pegged currency policy.

So how would the structure compensate for inventory risk?

In other words, the price produced by Bancor is only the tip of the iceberg. It could be the price that an MM decides to publish. We know it’s not a fake price because it’s backed by actual quantities. What we don’t know is how the quantities will be adjusted: we don’t know the MM actual risks (like the MM’s true inventory) or preferences (like the MM’s aversion to risk). In these conditions, anyone can try to reverse engineer the MM’s risks and preferences. Anyone can try to build a better model to arbitrage the MM: “the (stablecoin) shorts” would start to compete.

The Bancor Framework... With Custom Preferences?

Let’s illustrate the above with a simple model that is widely used in economics theory.

Given the sole dependency of the Bancor relay price on the connectors’ quantities, the model reminds me of one that is at the heart of some of the most advanced economic models: the Dixit-Stiglitz model.

The Dixit-Stiglitz model follows this simple hypothesis: “a consumer who is indifferent between the quantities (1,0) and (0,1) of two commodities prefers to hold a mix.” In other words, agents love variety.

In his 40-year review since the Dixit-Stiglitz model, Stiglitz states: “If the returns to shares of firms” (aka tokens) “are not perfectly correlated, then each is an imperfect substitute for the other. Individuals will want to hold all shares in their portfolio — just as in the Dixit–Stiglitz model, individuals want to buy all commodities” (aka tokens) ”that are produced.”

Bancor is a limit case of the Dixit-Stiglitz utility. Because inventories can never deplete, there will always be a mix. For two relays with similar connector positions, Bancor will always show the same consensus price, regardless of preferences. If the connector quantity of an asset drops, the Bancor price for the asset will soar. But what if the MM wants to take more risk and sell more of the asset, despite the low inventory? Dixit-Stiglitz lets the experienced market-makers show a more aggressive offer, should they believe that the price will revert to its mean. It gives market-makers more freedom.

The table below shows how the alternative Dixit-Stiglitz price would evolve compared to the Bancor price.

For an agent with specific preferences, FP should be the price that maximizes the Dixit-Stiglitz Utility.

For a Market Maker, FP should be within market bid-ask spread, closer to the bid if there is a buying interest, and closer to the ask in case there is a selling interest. The choice of feed price is the critical leeway we need to make the MMS algorithm a true market making algo.

FP could factor in a market maker’s preferences and risk aversion. We can let the market maker algorithm modify the connector quantities to target any set price. 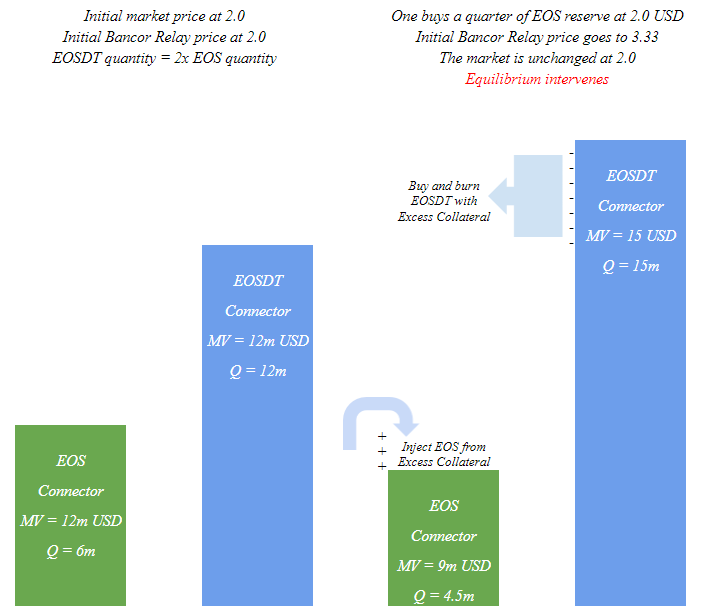 A Simple Wrapper: The Dixit-Stiglitz Protocol

Then $q_{EOS/EOSDT}^{Bancor}$ will be reset towards the optimal level that maximizes the agent’s Dixit-Stiglitz utility.

An Advanced Wrapper: The Market-Maker Protocol

Unlike a nonprofit central bank, the MMs objective is to maximize the book value of their MMS tokens. The astute MMs can design an algorithm that target the equilibrium price that maximizes the expected book value under their inventory risk constraints over a specific investment horizon.

This is the next step to build serious incentive for anyone to buy (or create) market-making tokens, and trust that their invested value will be maximized.

In the context of Equilibrium Labs, there is room for research into an extended role for the NUT token holders. NUT holders could interact with or even manage such an EOS/EOSDT wrapper for EOS collateral liquidations. The transfer of more EOS to a Bancor Relay would intuitively drive the EOS/EOSDT price down to account for the keepers rebate.

With this article and many to come, we are taking serious steps to educate the Equilibrium community, instill confidence in the framework’s mechanisms, and ultimately benefit the community itself.

"I am a statistician economist from the ENSAE in Paris with a MSc in statistics and financial modelling from Paris VII and La Sorbonne in Paris and a MSc. in financial mathematics from the University of Chicago. I’m a CFA charter holder and a member of the French Association of Actuaries. Principal/Owner at Y&M Advisors Ltd.

I started my career as a trader on a single-stock exotic derivatives trading portfolio, then headed the derivatives sales trading team at Commerzbank. I was also a portfolio manager on a volatility-driven forex-, equity-, and commodities-based global macro fund".

How To Get The Most Out Of Your GENS Tokens

2,000,000 EQ Allocated by Equilibrium for Phala Users
The Equilibrium framework is a software service with a consensus based governance system. EOSDT and Native Utility Token (NUT) are not a security or a regulated instrument. The use of this site and the Equilibrium self-service gateway is subject to Terms and Conditions, by accessing this site you agree to these Terms.
© 2020 Equilibrium